The Focal Length Closest to the Human Eye: If You Had to Take Just One Lens…

Which one single lens would you take to the proverbial island? Say you have to travel, want to go compact and have to make a decision. One lens. To cover your basic needs. Which one would it be? Which one fits your style best and poses the least possible compromise? In other words, if the human eye was a camera lens, what would it be? Which focal length offers the “most natural” vision and field of view?

What lens is considered to be closest to the human eye? That’s the lens I’d take to the famous island. Sure, it’s an impossible question.

50mm is definitely the equivalent to the human eye, says the camera salesman who is trying to sell you a camera with a 50mm lens. Look around. Yes, a 50mm lens could offer a similar view as the human eye. But so could a 24mm, a 70mm, a 200mm. Still, let’s give it a try.

To not get into the slippery territory of dogmatic equivalence, focal lengths in this article refer to 35mm film. So your Olympus 12mm F2 for Micro Four Thirds is a 24mm. The Canon 50mm F1.2L is what it says, a 50mm, but only when mounted on a “full-frame” 35mm sensor. On a Rebel/Kiss the 50mm becomes a longer 80mm.

This article is also not talking about zoom lenses — that would be boring — or which lens offers the best sharpness and smoothest bokeh. It’s strictly about individual characteristics of a given focal length. Let’s get started!

A single lens for the island? Forget anything in the range of 15mm and wider. That’s highly specialized glass with substantial barrel distortion. Having a 180° view may be fun once a year. Wisely used a fisheye may achieve the exact effect you’re after, but you soon grow tired of distorted angles, people and faces. Nah, won’t make it to the island.

But then again, you wouldn’t consider the Carl Zeiss Distagon 15mm F2.8 super wide, a crown jewel in its class, to be a fisheye, would you… You get the optics you pay for. Another wide classic is the Olympus 7-14mm F4 for Four Thirds. That said, super and ultra wide lenses can be great for nature, landscape, architecture and interior shots. Street or even people photography? Difficult. So I’ll pass the widest focal lengths for the island.

Still wide, very wide. Chances are you might see your own feet in the frame. But it’s getting interesting — but really only on a full-frame sensor. Great 21mm lenses would be the manually focusing Carl Zeiss and Leica. Also not too shabby: the Canon 20mm F2.8. Distortion’s well controlled and lens flare minor. Again, too specialized.

Well that focal length is neither fish nor fowl, even though Canon’s and Nikon’s F2.8 standard zooms start at 24mm. Panasonic has the exact equivalent with its 12-35mm F2.8, whereas Olympus lenses seem to generally like a base focal length of 12mm a.k.a. 24mm. Don’t get me wrong, I love the Zuiko 12mm F2. A 24mm crown jewel is the Canon 24mm F1.4 L. Not less spectacular the Nikon 24mm F1.4. Such nice glass, but massively big and expensive. For my taste a 24mm lens is not wide and never long enough. Neither fish nor fowl. For the island? Nope.

Home run? While the 28mm and more popular 35mm both seem to have a great sense of space, the 28mm loses less of the surroundings and seems more intimate than the 35mm. Great for portraits and people shots. Not your piece of glass if you absolutely want to see every wrinkle, but the 28mm focal length offers enough space to show a person in its surroundings without the subject/object appearing too distant.

Personally, but that’s my unimportant opinion, a 28mm lens offers the “most natural perspective” that reflects the way the human eye sees most naturally. Seeing through and composing with a 28mm lens is like seeing it with your own eyes. A 28mm lens on full-frame just seems natural, closest to real life.

Also consider this: The more popular 35mm is better for relatively static shots, the 28mm with its zone focusing better for fast moving situations with less control over subjects or anything.

Here’s award-winning street photographer Anthony Suau who exclusively shoots a 28mm on his Leica, saying the combo “doesn’t interfere” and is “an extension of my eye, part of my body, part of my being”:

The 28mm is more of a documentary focal length that draws the viewer into the scene and allows to experience what the photographer was experiencing at the time. It’s not as good in the sense of aesthetics for beautifying a picture with bokeh and shallow depth of field as the 50mm allows. The 50mm rather “paints” an image whereas the 28mm documents it.

Why not shoot a 28mm for some weeks or months. Over time, your knowledge of composition and reading light will improve just naturally. A 28mm lens can portray anything. It’s never too close and never too far away. Just go with it for a while. It will teach your eye to see. Shouldn’t it be wide enough there’s always stitching.

Last but not least, mounted on an APS-C sensor you’d get a 45mm, just the right mix between the 35mm and 50mm classics.

Classic focal length. In the textbook either the 35mm or 50mm is a photographer’s most important single lens. Shooting exclusively with a 35mm will most likely improve anyone’s photography. This focal length can tell great stories. But is it wide enough? I call it a good compromise. If you’re not really the person to go up close but a 50mm is too long for you, then this is your lens. And if you want to tell a “wider” story there’s always stitching.

That’s classic old school focal length. Leica calls it “the natural image angle.” Photography History teaches us that the 50mm prime lens was once the “staple” of the photography industry. The simple science behind the 50mm? It’s said to create natural looking images, especially when creating portraiture.

Often called the “standard” or “normal” lens, it’s said that it renders images that closely match the true perspective of the human eye. As noted at the outset, that’s debatable. It’s certainly easier to make an image shot with a 50mm look nicer than shot with a wider lens — for the simple reason that composition with a wider lens is more challenging. The longer the lenses, the easier to fire.

Overall, you can’t go wrong with a nice 50mm prime. Nice for expressive portraits. Fast aperture? Depth of field is awesome — but it’s more difficult to tell “a whole story.” Try, go wider. Sure Henri Cartier-Bresson shot with a 50mm lens. But he was shooting at a time when streets and cities were less crowded as nowadays. So to 35mm — or even the 28mm — today is what the 50mm once was.

That’s classic portrait range. Great to make people look nice and to easily isolate them from the surroundings and background. Close-ups, however, get boring over time.

Everything above 120mm is really for sports photographers, birders and wildlife shooters — or anyone too lazy to use one’s own feet as a zoom. Even though, using one’s feet is more like cropping. We’re talking different perspectives.

So which lens to take to the island?

Or a 35mm, with occasional stitching. But I’d prefer cropping to stitching.

And as a rule of thumb, if you find a focal length that suits you most, always go for the best glass you can afford. Remember, glass lasts, digital cameras don’t.

+++ THEME is different. If you consider buying camera gear or anything else for that matter, kindly support us and use our affiliate links. The small referral commission we get keeps us going, and you don’t have to pay a cent more for your purchase. Thank you!

>> INSPIRED EYE’s New Issue Is Out! 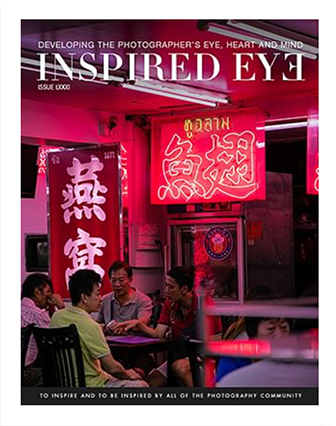